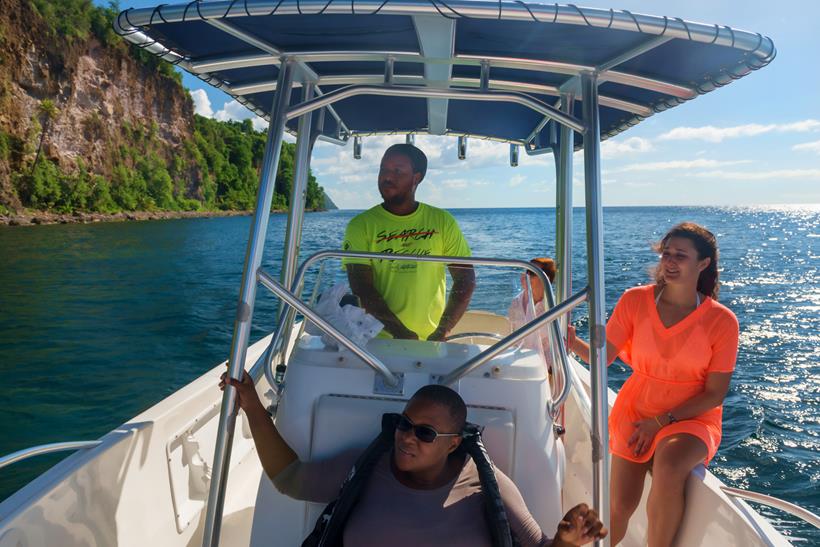 Don takes our guests on a lot of the offshore activities, including the two new activities introduced in this newsletter – Waitikubuli by sea and Night Snorkelling. We asked Don for his thoughts on what makes these new activities so special.

SB: What is the highlight of the Waitikubuli by Sea experience?
Don: Snorkeling alongside the Toucari Cave Reef and the Douglas Bay Point Reef (AKA Split Rock). In Toucari the cave is 45 ft down, with a big variety of colourful fish, including yellow tail snapper and Surgeon Major (a black, white and yellow damselfish).

My grandfather told me that once when he was on his way to Guadeloupe on a schooner part of the cliff smashed into the water and split at the top. The top of the rock is about 3ft from the bottom of the boat and the rock is probably a total of 35ft in height. In the split of the rock guests can see a lot of lobsters, which in season they can even catch and eat.

Another highlight is a waterfall which cascades straight into the sea. This is after the Cabrits and close to the village of Penville. If the channel is calm the boat can motor up to the waterfall.

SB: What makes night snorkelling so special?
Don: Going out into the unknown. One has to use light to see. Guests will see night time creatures such as lobsters, shrimp, sting rays, spotted morays, sea cucumber (a brownish slug that looks like a cucumber), sea anemone, sea horses and bioluminescence.